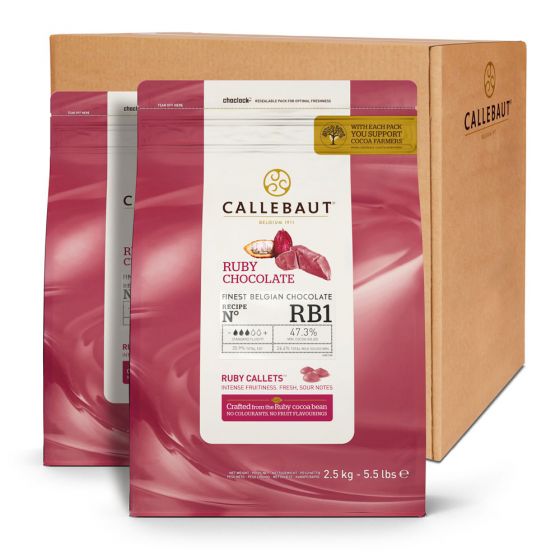 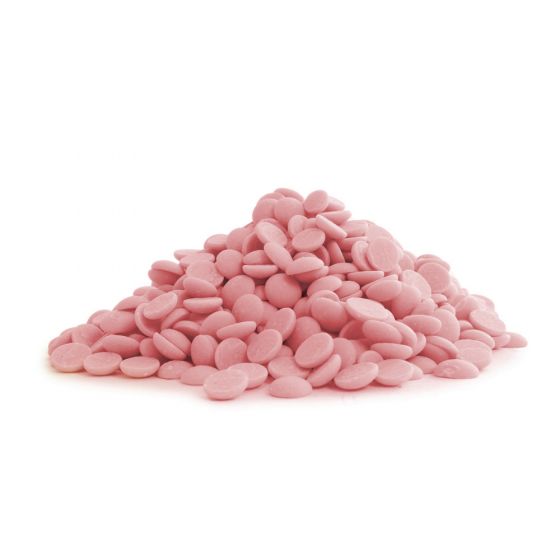 Callebaut's Ruby Chocolate offers a totally new taste experience, which is not bitter, milky or sweet, but a tension between berry-fruitiness and luscious smoothness.

This is a three-drop chocolate, which may require additional cocoa butter if using in a chocolate fountain setting.

Today, 80 years after the launch of White Chocolate as the third type after Dark and Milk, Barry Callebaut, the world’s leading manufacturer of high-quality chocolate and cocoa products, reveals the fourth type in chocolate ‘Ruby’ which is made from the Ruby cocoa bean. Ruby Chocolate has an intense taste and characteristic reddish color.

The Ruby bean is unique because the fresh berry-fruitiness and color precursors are naturally present. The cocoa beans are sourced from different regions of the world. The bean has a specific set of attributes, which Barry Callebaut managed to unlock through an innovative process that took many years to develop.

According to quantitative research performed by independent international market and consumer agency Haystack, Ruby Chocolate meets a consumer need no chocolate ever did before. It’s expected that Ruby, like Dark, Milk and White Chocolates will be introduced in different product categories.

The invention of Ruby Chocolate is the work of global R&D centers of Barry Callebaut, based in France and Belgium - part of a global network of 28 R&D centres, the Jacobs University, and over 175 years of expertise in sourcing and manufacturing.

The fourth type in chocolate offers a totally new taste experience, which is not bitter, milky or sweet, but a tension between berry-fruitiness and luscious smoothness. To create Ruby Chocolate no berries or berry flavour, nor colour, is added.

Ruby Chocolate has been tested and validated through extensive consumer research run by independent global research agencies Haystack and Ipsos in the UK, US, China and Japan. As part of these studies, Ruby’s consumer appeal and purchase intent have been tested, indicating consumers would buy Ruby Chocolate at different price points.

Peter Boone, Barry Callebaut’s Chief Innovation & Quality Officer, said: “Barry Callebaut has established itself as a pioneer and innovator in chocolate and cocoa, globally. Consumer research in very different markets confirms that Ruby Chocolate not only satisfies a new consumer need found among Millennials - Hedonistic Indulgence - but also high purchase intent at different price points. We’re looking forward to working with our partners on introducing this innovative breakthrough to the market and making the new Ruby Chocolate category available to chocolate manufacturers and consumers around the world as the fourth reference next to Dark, Milk and White Chocolate.”

Ruby chocolate was revealed at an exclusive launch event in Shanghai, China, on 5th September, 2017.

Suitable for gluten free and vegetarians. Not trans fat free, nor suitable for vegans.

Allergen information: Contains milk powder and soy lecithin and may contain trace amounts of nuts and milk proteins due to common processing equipment.

Whilst every effort has been taken to ensure the accuracy of the product information provided, products and their ingredients may change. You are advised to always read the product label for ingredients, nutrition, dietary claims, and allergens.