How to temper chocolate 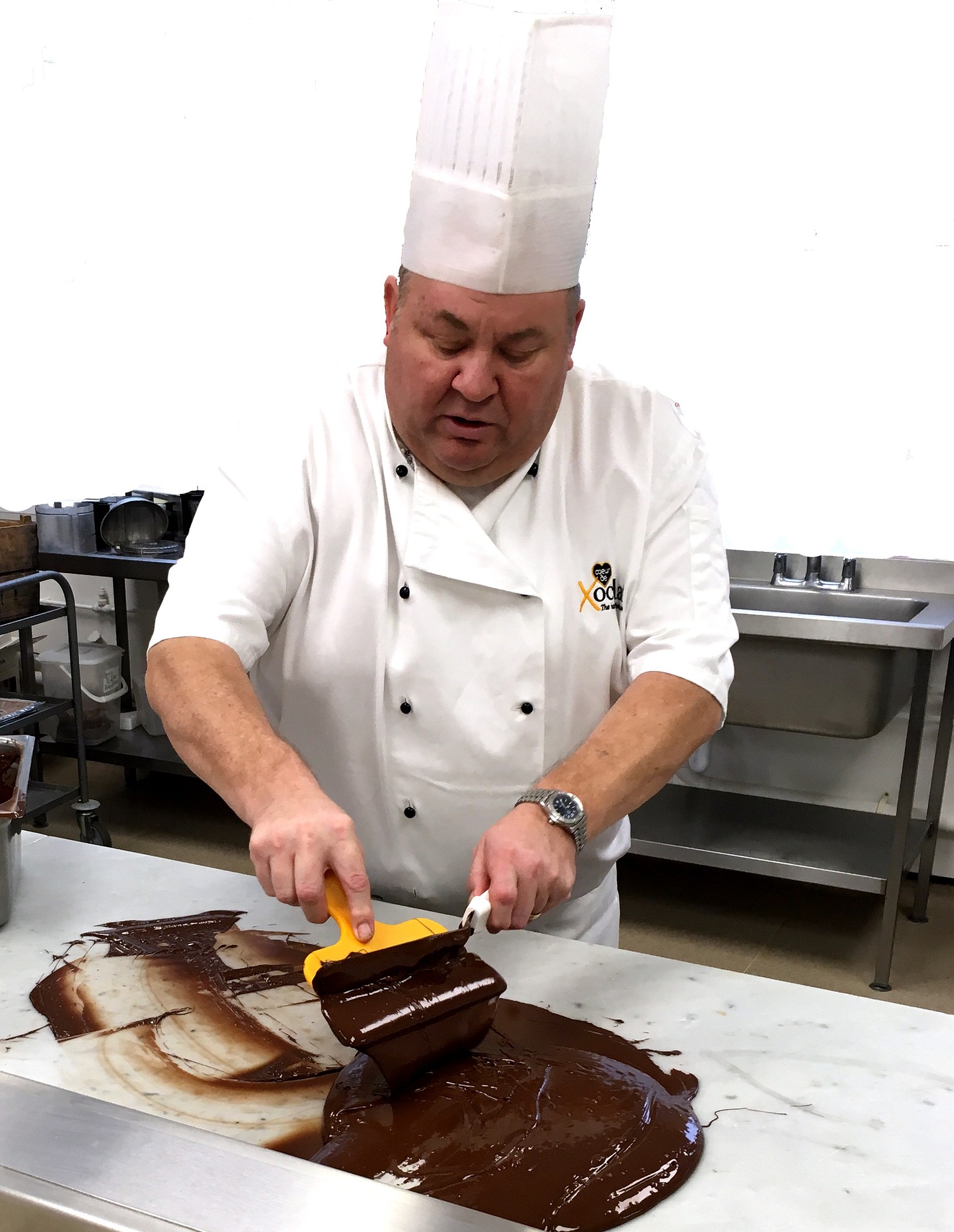 Need to temper chocolate? Help is at hand!

Believe it or not, the fear of tempering chocolate is quite common. But it can actually be fun.

I always thought tempering chocolate would be a daunting task – and really tried to avoid it. Recently I saw a segment on the Food Network on how to temper chocolate. Now, I’m all in to tempering! It’s actually fun!  There are so many recipes which really rise to the next level, simply by using a good quality chocolate and tempering it.

I’ve been a home cook and part time caterer for years, so I found many of The Food Network shows fun to watch and also got many good recipe ideas. Alton Brown has always been the most interesting, because he gave scientific facts about the food you cook and eat… and what actually happens, scientifically, to the food during preparation.

Over the years, Alton has played many a roll on the Food Network, but his “Good Eats” show has remained popular and entertaining, as well as informative, to this day. Who knows how many years it’s been on, and yes, how many reruns we’ve endured, but, he’s given us many interesting and important scientific facts about the food we eat.

Alton has several interesting “side-kicks” on his show. One he refers to as “W” is a well versed but impatient kitchen store employee who finds Alton totally exasperating because he searches for kitchen implements which are (as he put it) “multi-taskers”. In other words, he wants a pot or pan which will have more than one use in the kitchen!

The other side-kick, known as “Shirley” is an actual food scientist who explains reasons for the action and re-action you get when you mix ingredients or substances. I happened to be watching a “Good Eats” show recently and the subject “WHY TEMPER CHOCOLATE?” came up. It was Shirley’s job to explain exactly what happens when you temper chocolate and why it has to be done a certain way and maintain an exact temperature to be successful. I thought it would be interesting to pass this along to you and hopefully you’ll find it both interesting and helpful the next time you’re working with chocolate.

If you heat and cool chocolate without controlling the temperature – the crystallization of the cocoa butter will result in crystals of different sizes (bad crystals) forming, and your chocolate will bloom. To simplify, it will appear dull and covered with white patches. It will also crumble rather than snap and “melt in your hands, not in your mouth”.

Have you ever attempted home made candy during the holidays. I made a batch of caramel turtles years back that were scrumptious. However, they only looked scrumptious for about a day and half before they started turning whitish and ugly. That was before I knew about tempering which would have alleviated the problem… especially important when giving them out as gifts. Which I did.

If chocolate blooming does occur, the chocolate is still okay to eat, just not as attractive as if you would have tempered it. 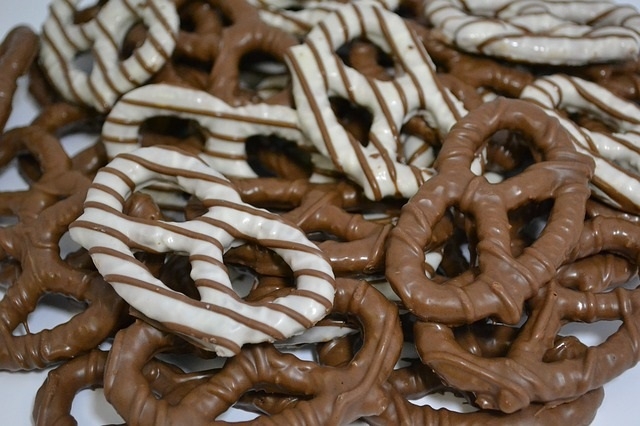 The Purpose of Tempering Chocolate

To avoid this, you need to temper your chocolate. Tempering chocolate controls the crystals, so that only consistently small crystals are produced, resulting in a much better chocolate texture. I have, whenever possible, avoided the need to temper chocolate completely by rolling my truffles in sugar, cocoa or nuts. However, if the recipe requires it and you want your chocolate to be shiny & “snap able”, without a white bloom, then temper, you must.

How to Temper Chocolate

So, exactly how do I do this, you ask? Well, there are just a few things needed to begin. And, really, it’s not rocket science and it’s NOT difficult. A couple of quick tips and you’ll be tempering like a pro.

First, don’t temper less than one pound of chocolate at a time. It’s easier to work with larger batches to maintain the proper heat and it’s also easier tempering dark chocolate (no milk solids) than tempering milk chocolate. So, if this is your first “go” at tempering, try using Sephra’s Dark Chocolate chips and save the Sephra milk and white chocolate for later.

Second, you’ll need a tempering thermometer. Easy to purchase online or at a kitchen store. Simply read the description to make sure it’s a good fit for tempering chocolate or a chocolate thermometer. I always read the reviews, too. Don’t want to throw my money away and customers are always brutally honest.

Now that you’ve tempered your chocolate, you must keep it warm but not hot, ideally in the 85-88 Fahrenheit degree range while working with it. You can keep it warm over a pan of warm water, but Alton Brown suggested using a regular “heating pad”, which I thought was genius. (We all have a well-used heating pad lurking in the linen closet somewhere.) Place a towel between the heating pad (set on low) and the bowl. Stir the chocolate often to main uniform temperature while you’re using it. Now you’re off and running to make all the chocolate goodies your heart desires.

So this is a bit of a sidebar here, but if you’re not familiar with Sephra Chocolate – I want you to be. There are many things you can do with Sephra Chocolate. Of course, we started in 2003 to create the best chocolate fountain chocolate; and worked with one of the world’s finest chocolatiers to formulate the perfect recipe for fondue chocolate. The thought of adding oil to our chocolate, like other chocolate fondues out there, was just unthinkable!

As the years passed, we realized we had the finest chocolate to do most everything. Sephra Chocolate Chips are ideal to use as baking chocolate. You can confidently use Sephra dark chocolate for some of the best chocolate chip cookies EVER. Stir Sephra Milk Chocolate Chips into hot milk for some sensational “hot” cocoa. If I am making a cake or batch of brownies I always throw a handful of Sephra chocolate chips into the batter before baking. It just adds a bit of chocolately deliciousness and makes everything more moist.

Of course, there is no question about how flawlessly it runs in our Sephra Chocolate Fountains; thousands of caterers, world-wide, would use nothing else. So by tempering Sephra chocolate, you’re now preparing it for candy making, frosting ganache (oh, give me a bowl and a spoon, please) or taking it to the “next level” as the term goes. We find the tempered chocolate is luscious as a chocolate coating on our Zen Waffles, the newest “IT” product to our Sephra line.

The Belgian or Premium Brands are outstanding, but must be tempered to keep their rich glossy color. If you’re not in the mood to temper, try the Sephra Melts – ideal for candy making without tempering.

Give Tempering a Try

So next time you’re tempted to not temper because you, like I did, have a fear of tempering, DO IT. It’s really interesting and fun and will really make your chocolate recipe extra delish!