Drinking chocolate is more than just adding powdered chocolate mixture to boiling water or milk, largely because drinking chocolate has been around since Columbus was credited with “discovering” this exotic treat in the New World. Next time you are craving some hot chocolate, try a little homemade hot chocolate that will satisfy your lust for rich chocolate and warm you on a cold day.

A Short History of Drinking Chocolate

In 1502, Columbus first encountered the Aztecs drinking a strange brew made from cocoa beans, which come from the Theobroma tree native to tropical areas like Mexico, and translates as “Food of the Gods.” Columbus also observed Montezuma drink 50 cups of drinking chocolate each day, which he found incredible, especially since he found the drink too bitter. The Aztecs would roast the cocoa beans before grinding them into a paste. They then added chili peppers, vanilla and water to the chocolate paste.

Although Columbus brought a sample of cocoa beans back to Spain, it wasn’t until Hernando Cortez brought cocoa beans back after 1520 that the Spanish started sweetening the paste by adding ingredients like sugar, vanilla, cloves, cinnamon, orange flower, hazelnuts or almonds that they began to see the merit of these cocoa beans. Once milk or water was added to this fragrant and sweet chocolate paste, the popularity of drinking chocolate quickly spread throughout Europe. 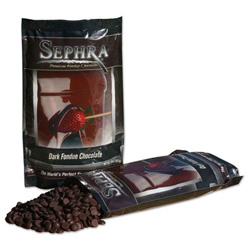 For a basic cup of delicious hot drinking chocolate, combine 2 cups of milk, 3 ounces of chopped semisweet Sephra chocolate, 1 ounce of chopped Sephra milk chocolate and 1 teaspoon of white sugar (optional) in a saucepan and whisk until almost boiling. Remove from heat and either whip with an immersion blender for extra foam, or pour immediately into two mugs and top with a dollop of real whipped cream.

That’s the beauty of making your own drinking chocolate using quality ingredients: the final taste is entirely up to you.