Chefs and chocolate lovers are constantly experimenting with chocolate. After all, you never know what might taste great covered in chocolate until someone is brave or creative enough to try it. Although these bizarre chocolate dipped treats might not make it onto traditional dessert menus, they are finding their ways into willing mouths everywhere.

He also offers a fresh take on traditional moon pies by dunking them in fresh, warm chocolate and sprinkling a healthy layer of freshly friend bacon bits and nuts. Grunder claims the vanilla filling complements the smokiness of the bacon and predicts they’ll be best sellers.

Dipping Bacon in the Chocolate Fountain?

Many of the chocolate fountain rental companies who use our fountains and chocolate have had interesting experiences with bacon being served as a dipping item. Typically, you have your strawberries, marshmallows, creams puffs, etc. Every now and again a caterer will bring out a huge tray of bacon (as ordered by the bride, or whoever is hosting event. And BAM! Before you can say chocolate covered strawberry – it’s gone! Guests go crazy for the chocolate covered bacon. Even though it may not sound appealing at first, that combo of sweet and savory cannot be beat. So the next time you’re racking your brain for something out of the ordinary at a chocolate fountain rental event or family party – break out the bacon!

Well, if Hollywood isn’t completely ready, Julia Roberts is ready to introduce all her friends to this unusual chocolate treat!

Roberts hosted a dinner party, where she presented platters of chocolate-covered crickets to her guests. Although a source at the party attributes this gesture as typical Roberts’ style and says she is always trying new things, the source also claims that Roberts was just about the only guest who indulged in this particular chocolate treat. Maybe Hollywood isn’t quite ready for that kind of chocolate decadence just yet. 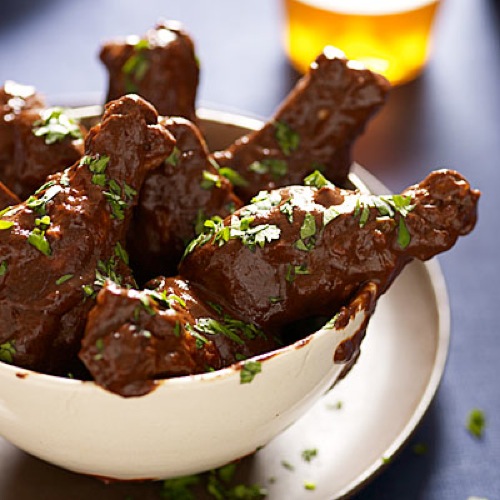 Although many professed chocoholics might claim that chocolate would taste great on anything, chicken skins might not have been uppermost in their minds at the time. However, Dominique Persoone, a Belgian chef known for his outrageous chocolate combinations and creations, introduced chocolate biscuits encrusted with chicken skins or gribenes – meaning chicken skins fried until crisp. This treat was introduced at the Paris Chocolate Show along with another interesting chocolate treat: chocolate-dipped cheese balls, which are apparently the new pairing for red wine.

The world of chocolate is constantly evolving, and those creative enough to try seemingly outrageous chocolate combinations just might discover the next chocolate craze to sweep around the world. You just never know what chocolate-covered delight is right around the next corner.