Combining dark chocolate and chilli dates back to the ancient Aztec civilization, who indulged in chocolate long before it was introduced to the Europeans. They often united the native cocoa bean and chillies, and this tradition is still found throughout Central and South America. Today, it is taking root among foodies who crave the sweet and savory combination of chocolate and chilli!

Chocolate and Chilli: The Beginning

The Aztecs discovered the delicious flavor when chocolate and chilli were combined. They originated the drink hot chocolate by roasting cocoa beans, and then using a mortar and pestle to grind the roasted cocoa beans with water and then flavored the drink with chilli, vanilla, honey and pepper. Of course, once the European settlers tasted this exotic quaff, cocoa beans quickly became a desired crop. 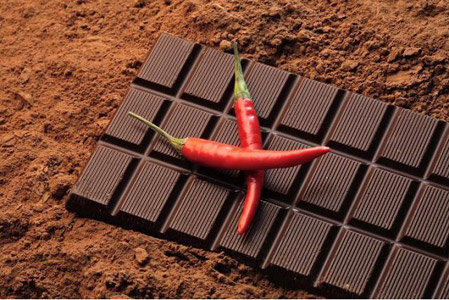 Today, chocolate and chilli is combined in a variety of recipes, from main courses like chilli to sweet desserts with a kick, like cupcakes, brownies and even ice cream. Chocolate and chilli is becoming more acceptable here in the U.S. as gourmet chocolatiers produce confections like chocolate covered jalapenos or offer customers hot cocoa spiked with chilli to warm them on a cold day.

How to Incorporate Chocolate and Chilli

Many recipes are easily altered to include either chocolate or chilli without having to create a special recipe for a chocolate chilli occasion. For example, brownies infused with chilli are becoming more popular, and many at-home cooks simply take their favorite brownie recipe and add chilli flakes or chopped red chilli pepper to the dry ingredients.

Even well-known manufacturers of cake and cupcake mixes like Duncan Hines have gotten on board the chocolate and chilli train with a variation on their chocolate cupcakes and cake mix. By adding cinnamon and cayenne pepper to both the chocolate cake mix and the chocolate frosting, Duncan Hines assures bakers that the result will be “muy interesante!”

The main course dish chilli can be infused with dark, unsweetened chocolate and espresso powder that deepens the flavor of the chilli, but won’t overpower it. Restaurants that make their own ice cream might feature a chocolate chilli ice cream, but there are plenty of recipes that allow you to experiment with making your own version!

Whether you’re adding a dash of chilli pepper and cinnamon to your hot chocolate or cupcake batter or chopping dark chocolate for a chilli supper, foodies and chocolate lovers agree that combining this dynamic duo of chocolate and chilli will kick your next dinner or dessert up a notch.